The Coolest Travel Map You Will See All Week 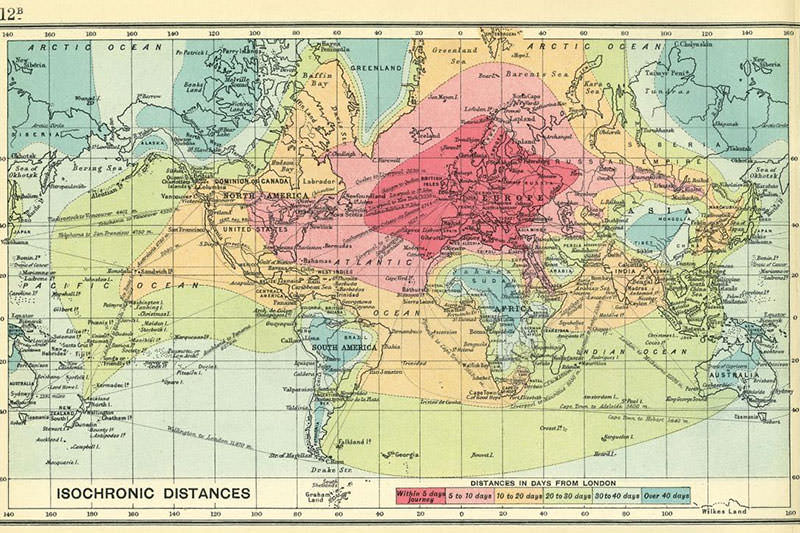 We live in an age where you can reach pretty much every point on the globe within 24 hours and it has become quite difficult to imagine a world where travel might have taken days or even weeks. The map that Intelligent Life Magazine unearthed is all about this, the olden days of travel where it often took quite a bit of time to reach certain parts of the world.

The map in question dates back to 1914, created by John G. Bartholomew, a member of a very famous Edinburgh mapmaking family and was included in a book called An Atlas of Economic Geography. The book was envisioned for schoolchildren (more precisely, schoolboys) who were inspired to learn about the world they live in. Among other things, the book had maps covering rainfall, topography, temperature, areas rich in rice, cotton or rubber, as well as the distribution of languages used in commerce.

This particular map was something called an “isochronic map,” meaning that it shows lines which joined points travelers could reach in a certain amount of time. The starting point, of course, was London and the map showed how long it took to reach different parts of the world. You might expect the map to show concentric circles, more or less, but no. As you will see, certain areas could be reached in shorter time than some which were closer to London, depending on a number of factors.

For instance, it took less time to reach South Africa than Sub-Saharan Africa which is, speaking in miles, much closer to London. Certain parts of Siberia were also quite accessible, mostly thanks to the Trans-Siberian railroad which was, indirectly of course, quite well-connected with London. In fact, it all came down to the railroad connections which made certain parts of the world quite easy to reach despite the actual distance.

Another destination that could be reached relatively quickly were the Hawaii islands, especially considering the actual distance that had to be covered. The areas that were particularly difficult to reach included Central Africa, Central Australia, certain parts of Mongolia as well as central parts of South America.

And there you have it. A bit of travel museum curiosity, so cool and yet so educational, showing very clearly the importance that railroads played in the early 20th century.